Combining neuroimaging, neuromodulation and simulations to explore the social role of the cerebellum

The cerebellum is a brain area that has been neglected in research for several decades. For many years the cerebellum was thought to be relevant only for motor processes. However, in the last two decades the cerebellum has become more and more important in the research of social interactions, like understanding other´s beliefs. The cerebellum is in charge of generating models of future actions, not only a sequence of movements (for example how to move your arm to reach a glass of water) but also social sequences (for example when you interact with the cashier in a store).
Some disorders, like the Autism Spectrum Disorders present anatomical abnormalities in the cerebellum which could be linked to the social difficulties that these people often experience.
In this project we work with neurotypical individuals and with ASD patients combining simultaneous neuroimaging (fMRI) and neuromodulation (mostly tDCS) to further explore the social role of the cerebellum and to develop a potential line of treatment for those with social difficulties.
A small part of this project seeks to find the optimal tDCS montage by simulating the electrical stimulation and analysing the electrical currents induced in participant´s brains. 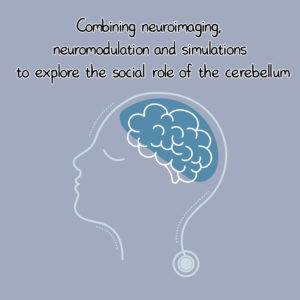